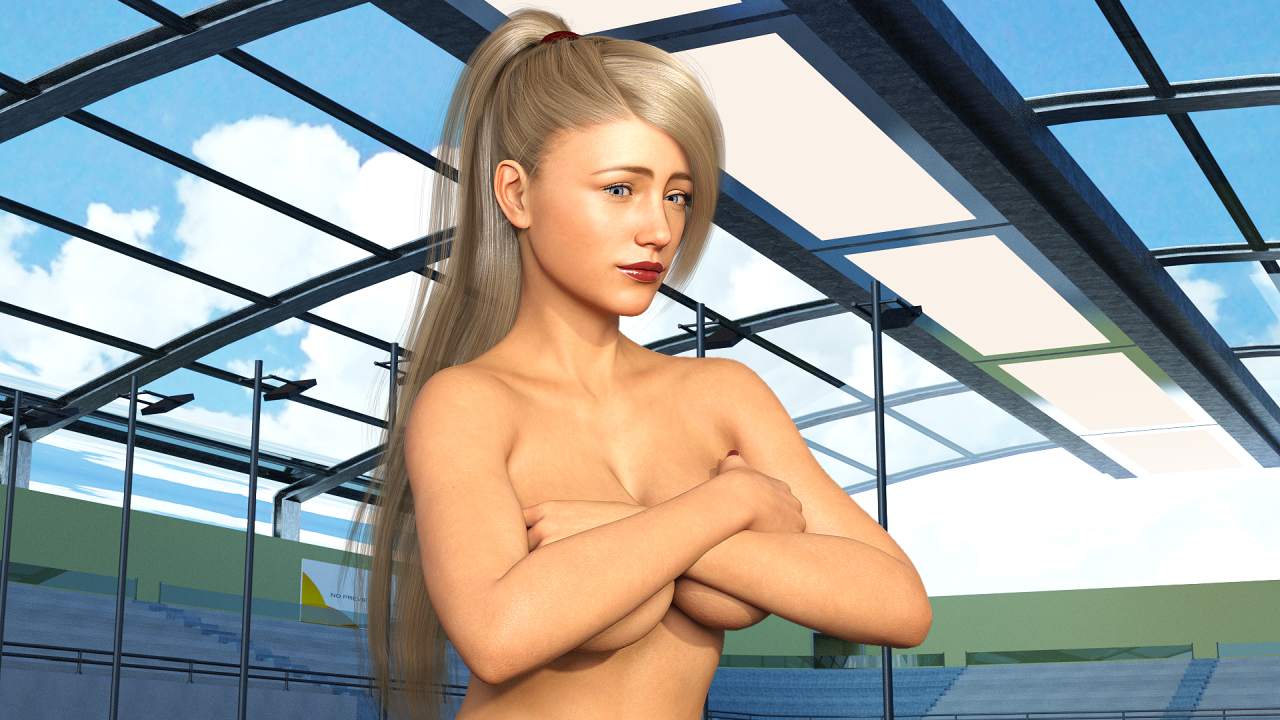 For starters, the switch to Ren’py is a good one as visual novel style suits many of the games in this genre a lot better.

For most of the “rpg mechanic” based story-driven games, it’s a good flow.

Now, as to the story, you are again the lackluster blank slate token. I don’t (always) have a problem with that. In this case, there are two paths.

One gives you over time, a more dominant perspective and control of your ‘harem’ that you spend time building.

Some things in the structure should be made clear from the start. For example, it’s best not to create two paths, and have one of the said paths take multiple variants.

I’ll explain. In the dominant path, you would expect that you end up being dominant. Right? Good. Still with me then.

However, when you take an extremely dominant stance with your originally more “alpha” new best friend and tell him to stay away from your family, of course he doesn’t listen. And you don’t get the option to punch him and make it a LOT more clear there are consequences.

This is massively confusing in context and could be easily mended by simply stating in the intro tutorial. That explains there are multiple paths, an option that allows any given player to choose if they want to be the “alpha” or the “Beta.”

There should never be a question of which outcome you’re going to get. Most people will have their tastes clearly defined by the age they want to play this type of game, and I personally did not like the question mark as to where the dominance lay.

He is still a virgin by the end of the game so far. In dreams doesn’t count, and if a person is playing this game, titillation only goes so damned far. Games of this nature are meant to be fun.

If I wanted to think that hard about whether I was going to have a shot to win the girl, I’d bother being on the computer a lot fewer hours guys.

People get enough frustration sexually and otherwise in reality, and there is something detrimental to adding too much “immersion” or “realism” into this genre of gaming.

There is also the problem of how the teachers act in the story because that IS a point of realism I would have expected to be there. It’s not.
The calculus teacher is a dom who takes one hot girl’s skirt down – she’s barely wearing underwear – and beats her arse bloody with a switch. First problem legal consequences.

Pretty much immediately after said student got home I guarantee it. No dean, no matter how corrupt or lackadaisical, would EVER allow a teacher to do this to a student who’d paid tuition.

Hell, they can get fired for a freaking hug these days. A hug! Another teacher is basically either a stripper or prostitute and of course, she’s the Latin bio teacher.. but I digress.

That girl bent over the desk to be beaten is the “current best girl” of your new alpha friend, but you can (sort of) one-up him.

Though there is nothing definitive to it right now, and I think she’s mostly there to be dragged out as all hell.

If you as the MC and a supposed Dom path can’t actually make your “best buddy” back off chasing your step-sister or step-mom, how in the ever-living holy hell are you supposed to “steal” his girl? I mean, it’s not rocket science.

It’s called suspension of disbelief. That calc teacher may as well be teaching rocket science though. And, since she’s a Dom character herself, I doubt very highly that you’ll ever get the option to “break” her.

I personally don’t go in for that kind of dominance. It’s actually a show of weakness when one thinks about it.

The same with humiliation, but I know there’s probably a lot of people who’ll disagree with my view on that.

All told, I’m mostly disappointed here because the story does have some potential as a power fantasy, escapist release.

That’s what it should be, what it can be, and what I hope it actually will be. At least one day when it’s fully done. The artwork is well enough done. The mystery needs to be a little more concrete as far as being able to solve it. Also, the paths could use a weed whacker for clearing the maze of options that fuck something over.

Why for example on the “alpha path” do I want my females to be corrupted or sluts for any reason? The only one a harem centre Dom would want them focused on at all is him. Plain, simple. At least, it should be.

As I’ve stated, there is a bit of progress that implies they grow in interest. However it’s far too subtle right now, and far too slowly done. I do see a diamond to work with, for those that like the power theme, and don’t mind a gradual growth.

It’s just that right now, there’s still a hell of a lot of coal to dust off before it really gets there.

I’d catch you all on the flip-side, but I’m really not one to tan.